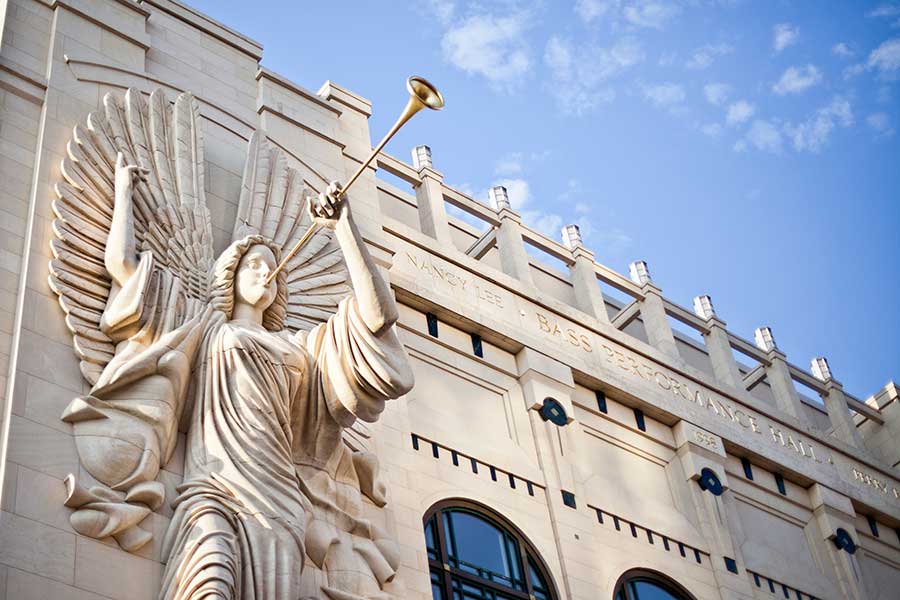 When you embark on a Fort Worth Walking Tour, every time is something new.

On June 9, we – two reporters for the Fort Worth Business Press – went on the Fine Arts and Culture tour, which featured a behind-the-scenes look at Bass Performance Hall.

On the already warm morning at 9 a.m., we met Donna and Tim Young, the founders of the group, in the historic Texas and Pacific Railway building, now known as the T&P Lofts building.

“We really got interested in Fort Worth architecture and history and stuff because we live down here in this historic 1930 … the amazing building called the Texas and Pacific,” Tim Young said.

Donna Young explained that she and her husband had been up since 4 a.m. that morning, preparing the tours and making trays of breakfast burritos for the day’s walkers. Tim makes the burritos in homage to his past as a restaurant owner.

While everyone ate their burritos and drank orange juice, Tim explained that this time the group was trying something new. Rather than have all five tour guides give variations on the same tour, today each guide had picked his or her own tour to offer.

The tours of the day were:

After introductions and explanations, everyone dispersed to the tour of their choice.

Because of our interest in Fort Worth Fine Arts and Culture, we followed Donna as she made her way to the first stop: the Fort Worth Water Gardens.

The space, now occupied by the Water Gardens was a part of what was known as Hell’s Half-Acre, a generally dilapidated, low-income, crime-ridden area of old Fort Worth. The space was eventually cleaned out and renovated into today’s Water Gardens.

Next to the Water Gardens is the Fort Worth Convention Center, where we learned that the domed arena, the site of many concerts from the Rolling Stones to U2, might be torn down.

“There is a plan for the dome to be demolished and all of that need for space will be picked up at the new [Dickies Arena] over by Will Rogers,” Donna said.

As we strolled along the brick streets of downtown, we saw another reminder of Kennedy, the JFK Tribute memorializing the rain-drenched impromptu speech Kennedy gave to thousands on the morning of Nov. 22, 1963, in Fort Worth hours before he was killed in Dallas.

The tribute includes a bronze statue of Kennedy with selected quotes from some of his speeches.

In November, Walk Fort Worth also offers a special JFK tour featuring the monument, a recording of Kennedy’s speech and more.

On our way to the final stop of the tour, we walked past the Ashton Hotel, which according to our tour guide has hosted billionaires, Warren Buffett and Bill Gates.

Walking into the air-conditioned Bass Hall was a respite that we desperately needed 30 minutes into the walking tour. Once inside we met our volunteer docent, Sue Drautz, who would take us through the building, into the audience chamber and down to the tunnel that connects the hall to Maddox-Muse Center across the street. The tunnel from Maddox-Muse is how the hall gets its electricity as there is no electrical or mechanical equipment in the audience chamber.

Perusing the halls toward the audience chamber, Drautz called our attention to the plane wire used in railings throughout the building, which references American Airlines, one of the major donors for Bass Hall’s construction.

Going into the audience chamber, our eyes were immediately drawn to the blue midday sky lit up in purple LED lights on the ceiling.

Drautz told us that Bass Hall art such as the ceilings of the audience chamber and the corridors were painted by twin brothers Stuart and Scott Gentling.

“In that sky, you might see two golden eagles the Gentlings painted to represent themselves,” Drautz said. “Three sections to the right of the birds is a crescent moon in honor of their late mother, who encouraged them to do their artwork.”

She noted that the west corridor dome was painted to depict the western afternoon sky in Fort Worth, with the east depicting the eastern morning sky.

While we stared at the ceiling, Drautz mentioned that math enthusiasts would know that the circle in the center of the dome was designed using the Fibonacci sequence.

“It’s like a flower that blooms and each petal comes out from the center and is graduated larger as it comes out, and that’s how the marble in the floor is also,” Drautz said.

She then called our attention to the three smaller replica domes in the upper gallery, one of six sections in the chamber.

Sitting in the cavernous hall, we learned the tale of Bass Hall’s ghost light.

The ghost light, Drautz said, is from the Elizabethan era when all theaters were rumored to be haunted, so they made sure to always leave a light on the stage so the theater would never be completely dark.

“Ours is on a pedestal and rolls and it’s always in the center of the stage if nothing else is going on,” Drautz said.

When the Bass Hall tour was over, Donna explained why she and her husband take time out of their weekends to embark on these journeys.

“Tim and I give the tours because we love Fort Worth,” she said. “We’re really proud of what Bass facilities has done and also what groups like Downtown Fort Worth Inc. have done for the downtown area to promote culture and residential properties and restaurants and tourism to this area.”

The group has been giving tours for about four years, offering about 14 different experiences throughout the year. One of their coming tours follows the announcement of XTO Energy’s exit from Fort Worth and looks at the six historic buildings the company currently owns.

The “XT-Uh-oh” tour on Aug. 12 will look at the past, present and future of these buildings. Tour guides will meet participants in the meeting room of the T&P building, 221 W. Lancaster Ave.

“We believe it’s important to connect people not only with what’s here right now, like Bass Hall, but with the history, how things like this got here,” Donna said. “All this connects to where we are today and how we got to this point. We love the people and we love the city and that’s why we do it.”